After handing out plenty of awards in part one, we dive straight back into dishing out the least prestigious awards in rugby.

Lord Lucan Award for Going Missing
Plenty of players have been accused of going missing in the big games, some fans seemed to have disappeared from the stands, some common sense seemed sadly lacking in disciplinary panels, but nothing vanished more noticeably than Owen Farrell’s arms during the autumn. Much like Nessy we've all seen the photos of their existence, but nobody has witnessed them when they count.

Shithouse of the Year Award
Whilst Maro Itoje proves to still be as annoying as a mosquito on cocaine, his shithousery level remains entry level compared to the disgusting level of thuggery displayed by buffet worrying centre Mathieu Bastareaud. A swinging forearm to the unprotected head of a floored Christophe Samson followed on from an homophobic slur earlier in the year. Built like a brick shithouse and with the attitude of an actual shithouse, Basta is run away winner.

The WWF Award for the Biggest Risk to an Endangered Species
Not since the Japanese decided to declare a genocide on sea mammals has an assault on something that needs protection been as obvious since the English Premiership clubs decided to launch an attack on the British and Irish Lions this year and endangered more lion's futures than fat American tourists in Africa.

Spirit of Rugby Award presented by @PhillTheBull
"Neath RFC squad Vs Bargoed Nov 16th 2018... Boys that hadn't been paid for a month, over half the squad walked, permit players all over the shop. Won 30-12. Tears."

The Fred Elliott Award for Butchered Opportunities
Cai Devine's hard work prevented a sure try for Jonathan Laugel, Jamie Farndale's moment of madness, Alamanda Motuga's brain failure for Samoa were all captivating viewing, but it's hard to look past Freddie Burns' "he's behind you" moment with Maxime Medard in the Champions Cup.

Best Video of the Year
Despite SquidgeRugby putting out some excellent content this year, nothing will beat the sheer trolling joy of Rassie Erasmus and Andre Esterhuizen's tackling drills video post Twickenham.

Luke Charteris Award for Most Column Inches
Whilst concussion has dominated the news, it is completely justified with the impact it has on players and how it will shape the future of the game. The continued furore that rumbled for over a week after "Flaggate" descended from funny to farcical.

Biggest Fun Sponge Award
Imagine beating the most successful team in sport... for only the second time in your very long history... the first time ever at home... and focusing on the negatives. It takes a special kind of mentality, that Ewan MacKenna has mastered.

Overreaction of the Year
After a dreadful spell that saw them finish 5th in the Six Nations, lose a tour to South Africa and concede 63 points in a defeat to the Barbarians; the English media's embarrassing response to a close game against the All Blacks and a win against the Wallabies was to instantly declare Uncle Eddie's men as World Cup contenders and some of their players as the best in the world.

Worst Lid Award
Brodie Retallick and Elton Jantjies have haircuts that should embarrass their barbers, but Tomas Francis has a worse lid than second hand Tupperware. 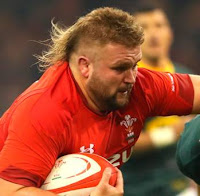 Emotional Farewell
It barely feels like yesterday that Sam Warburton burst onto the scene and tore up the breakdown, challenging the finest flankers the world had to offer. The 2011 World Cup will almost be exclusively Sam's to some Welsh fans and after Six Nations titles, Grand Slams and Lions tours, to see Sam hang up his boots for good has been emotional to say the least.

Warrior of the Year
Sometimes one player or incident transcends the game. 2018 has been the year of Doddie Weir. An incredible personality that can't even be dampened by a debilitating illness and maintaining an happiness that even a goth Ewan MacKenna on a downer couldn't bring down. An all round incredible human being and not just Warrior, but human of the year.

As a tribute, the song to play us out is one of the big man's favourites. Here's to you Doddie...