Without further ado, let's hand out some awards.

Team of the Year
Whilst I have absolutely no qualms with World Rugby awarding Ireland their Team of the Year there is one team whose year has been one of glorious, unprecedented success. A ground breaking 12 months that completely changed the game... there is no team better than Bristol Bears Social Media Team.

Worst Team of the Year
Easily the Northampton Saints Social Media Team. From the terrible announcement of The Hask signing, the Baby Shark video and the god awful GIFs. Cringing until it hurts.

Player of the Year
From the moment he dropped the goal against France, it was clear that this year was going to be a special one for a certain Mr Jonathan Sexton, whilst both club and country showed just how vital Faf de Klerk is to their cause. There is no front row bias here though and the importance of a world class prop is duly recognised. Tadgh Furlong is the 2018 Ruck 'n' Roll Player of the Year.

Match of the Year
There is one stand out game that shaped the landscape of rugby's elite on the international stage. A game that proved just how important the season before the World Cup can be and how in 80 minutes everything can change. I'm of course talking about Germany v Canada in Marseille. Also, Ireland and Springboks beat All Blacks in some lesser games apparently.

Worst Match of the Year
A game more dour than Eastenders at Christmas or Coldplay's Greatest Hits, Bath v Sale was the kind of game that could climb into your soul and replace it with blackness and despair. No YOU'RE being dramatic.

Tackle of the Year

Tit of the Year
Awarded to the rugby personality whose extra marital activities have been somewhat questionable to say the least. An unusually quiet year on that front, but former England fullback and future MLR star Ben Foden's dalliances cost him his marriage to former Saturday Una Healy.

Twit of the Year
While there are an abundance of social media "personalities" who could stake a claim for being the worst Tweeter of the year - you know who they are - this has be another award to grace the already bulging trophy cabinet of Stephen Jones. Trolling, serial blocking and victim playing throughout his timeline. Whilst being far from the only one, he continues to set the bar for others.

Twat of the Year
Izzy Folau. No further justification needed.

Best Shirt of the Year
A huge fan of the simplistic, clean and simple kit design so obviously the winner is a madcap beauty from South America. The Jaguares home shirt is to be marveled at, admired and adored. The orange on black, the new badge and the thought of Jaguardo rocking it. Marvelous. 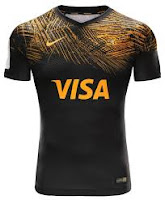 Worst Shirt of the Year
Not just the worst shirt, but one of the most offensive things in rugby ever. Aimed firmly at the Harold Bishop market, Australia's fishing and Hawaiian shirts are the worst things committed to polyester. 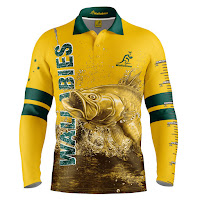 Pod of the Year


There was a time when a good rugby podcast was difficult to come by, but that's no longer the case. Flats and Shanks, Scrum V and House of Rugby have all put out excellent content this year. However, it's Blood and Mud that week on week continue to produce the best most laid back pod that mixes the hilarity of its weekly episodes with the in depth informative and interesting history of rugby episodes; Josh and Lee are THE best rugby podcast currently available.

Forcefield Award for Best Defence of the Year
Leo Varadkar is Ireland's head of the Department of Defence. Ireland's true An tAire Cosanta is Andy Farrell. Ireland's green wall that keep the All Blacks at bay - including Peter O'Mahoney proving to be the best sweeper since Franz Beckenbauer.

Best Hand Off Award
Jon "Foxy" Davies' pneumatic armed double off load was something magnificent and Matthew Morgan's hand of Wigglesworth on his way to a breath taking try against Saracens were joys to behold, but both pale in comparison to Hamish Watson manhandling Ross Moriarty.

Keep an eye out for part 2 of the awards. At Cardiff Arms Park the half time music would  probably be DJ Otzi, but we are much better than that. Our half time music is my favourite song of 2018.

Dylan and Caitlyn - Manic Street Preachers and The Anchoress