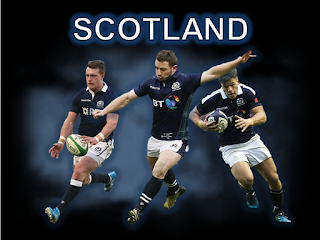 
A disappointing fourth place finish despite impressive victories over France and Italy. A decent  autumn with two wins against Japan before victories against Argentina and Georgia. It was heartbreak against Australia again though with a 1 point defeat.

Coach
The results don't tell the tale of Vern Cotter's time in Scotland. Just two Six Nations victories to his name so far. Scotland have made big improvements in those two years. This tournament will be Cotter's last for Scotland before he hands the reins to Gregor Townsend and his players will want to send him off in style.

Captain
Scrum half Greig Laidlaw has been an excellent player for some time for Scotland, but has often not received the credit he deserved. That's changed since his 2015 World Player of the Year nomination and rightly so.

Star player
Scotland have struggled for star quality for a period but that has changed. Lightning quick Stuart Hogg is capable of magic from anywhere on the pitch, Huw Jones added creativity to their midfield whilst Finn Russell continues to prove himself among the best half backs in the game.


One to watch
With the injury to WP Nel Scotland will turn to young prop Zander Fagerson to shore up their scrum. Fagerson has been impressive for Glasgow Warriors and his four caps at prop aged just 21 is testament to that.


Strengths
Scottish rugby is on a wave of positivity with Glasgow reaching the quarterfinals in the Champions Cup, a fine Autum and the development of truly international quality players. Couple this with Cotter last year in charge and Scotland could be dangerous.

Weaknesses
Defence let Scotland down last year and coupled with the lack of a killer instinct lost winnable games.

Prediction
Sometimes rudderless in the past, their halfbacks and midfield now have enough quality and creativity to make them contenders for the top three. Ireland up first at home will be a test for both teams.