We've already handed out awards to Georgia Page, Jonathan Joseph and Dan Carter; as well as plenty of others. Now we continue our presentation of our awards for some of rugby's good, bad and down right hideous.

Blink and You Missed Him Award
Sam Burgess’ rugby union career lasted 27 games - 21 for Bath, 5 for England and a solitary Saxon appearance. Rudy Paige's World Cup was shorter the Richard Cockerill's Christmas Card list. Given just the final three minutes of the playoff game to add to the sixteen he had been given throughout the rest of the tournament

Biggest Heart
Florin Surugiu won plenty of hearts with his proposal to his girlfriend at Wembley after a thumping from Ireland. Sonny Bill had us question whether he his the perfect human when he presented his World Cup winners medal to a fan who was rather heftily grounded by a steward. It's Aussie centre Adam Ashley Cooper who got us right in the feels though. When an old junior rugby teammate, Guy Grinham, was diagnosed with terminal cancer, AAC was on hand to help him love his dream of watch Australia at the World Cup. Then, after the Wallabies beat Wales, Cooper ascended the steps to Mr Grinham's executive box at share the moment with him. Guy sadly past three days later, but his family said they will never forget the smile Cooper brought to his face in that moment.
The Luke Charteris Award for Most Column Inches
Sam Burgess almost retained his award as every facet of his game went under the microscope (little wonder he couldn’t wait to go back to league), before his switch back gave them more to write about. Concussion was the year’s biggest talking point however. Be it George North or Mike Brown that filled the pages, the concussion discussion was everywhere and even had it’s own documentary. It’s great to finally see the light shone on the issue and huge advances be made in deal with it.

Biggest Dance Craze
The cringe worthy Matt Dawson haka, the funny Air NZ Men in Black video, the awe inspiring double haka of New Zealand and Tonga; all topped by one kick routine. Everybody do The Biggarena

Typo of the Year 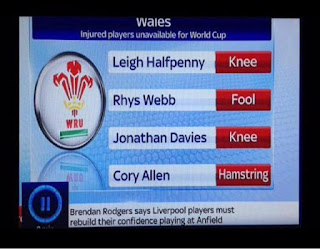 Best One Liner
Jonathan “Jiffy” Davies is usually good for a few every match he commentates, Lou Reed asking “hands up who had turkey for Christmas?” mid scrum is close, but Nigel Owens is the king of the one-liner. His missive to Stuart Hogg at St James’ Park – usually a football stadium – the best: “If you want to dive like that again, come back here in two weeks and play, not today.”

Force Field Award for Best Defence
Wales’ defence against Ireland in the Six Nations was staggering. Phase after phase of Irish green repelled in one of the most epic defensive efforts we’ve seen. Then along come Australia like an impenetrable gold brick wall to stop Wales scoring despite being down to 13 men. An incredible performance from the Wallabies.

Day of Rugby
Whilst the WRU's Judgement Day continues to build into an event as big as the Twickenham Double Header, nothing could compare to the Six Nations' Super Saturday. 200 points scored over three games, with three nations chasing the title and tries raining in from every angle.

Most Influential TMO Decision
Nikola Matawalu thought he had scored against the hosts on the opening night of the World Cup only to be denied before the kicker took the conversion. Dan Biggar was mid run up against Bordeaux when the TMO was called. His conversion was successful but chalked off for the review, which concluded the try stood and Biggar missed the retake and the Ospreys lost by the narrowest of margins. It wasn’t as important as Nigel Owens signalling for the TMO during the Pro 12 playoffs between Ospreys and Munster. The Ospreys crossed the whitewash after the time was up to book their place in the final. Referee Owens thought he spotted a knock on in backplay and elation to turned to despair as he was proved right, the try was scratched off, the full time whistle blown and Munster progressed.

Prolific Texter of the Year
Mike Phillips. Here's two of his finest.

To Lloyd Williams after Williams was named as third choice scrum half ahead of Phillips:
"You've retired a legend."

To Dan Carter on his arrival at Phillips' club Racing 92:
"Hi Dan. Great news. Finally the world's best nine and 10 are going to play together."

Although Paul O'Connell was close when on the back of Phillips retiring he sent the Welsh scrum half a text saying, "I thought you'd retired two years ago." 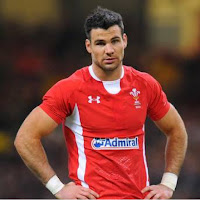 Meg Ryan Award for Most Awkward Interview
England fullback Mike Brown for his one word answers, grunts and generally hurling his toys from his push chair after losing to Wales. #Awkward.

Family Feuds
Wales v England saw cousins Toby Faletau and the Vunipola brothers stand on either side of the halfway line twice this year. However, it was the two Princes coming head-to-head at Twickenham that really drew attention. William decked out in the red of Wales, Harry in the white of England. Belting out anthems and cheering tries it a proper sibling rivalry to enjoy.

Excitable Fan
Scott Quinnell is often excitable at the prospect of a Wales game, especially when the staff from Admiral insurance company. The Ireland fans watching Japan's incredible win over The Springboks at Cardiff's fanzone. A Japanese fan meeting Shane Williams in Cardiff made for compulsive viewing. None were as excitable as LA Welsh film star Ioan Gruffudd who screamed around his LA home in nothing but his pants as Wales beat England and set social media alight.

What Happens in Vegas...
The fantastic rock 'n' roll story of James "Cubby" Davies' trip to the Sin City.

Warrior 2015
Springboks backrower Schalk Burger came close to death when meningitis left him battling for his life. So serious was his illness his family were called to say their goodbyes, but Burger is a fighter and within two years was back in the green of the Springboks and competing on the World's biggest stage.


In 2015 we also lost the rock icon Lemmy. Here he is with the rest Motorhead performing their biggest hit, Ace of Spades, on The Young Ones.
No comments:

Award season has begun and, in keeping with the spirit of things,  we present our annual Ruck 'n' Roll Awards.

Team of the Year
Tier two Nations stood to be counted – not least Japan and their incredible victory over the ‘Boks – Argentina proved their worth and Toulon continued to dominate European rugby. There can only be one true winner though and that is the mighty All Blacks.

Player of the Year
David Pocock has been incredible and is arguably the best openside in World rugby... even when at 8. However, after finally getting his hands on the Webb Ellis trophy and playing a vital role in doing so, Dan Carter is thoroughly deserving of the award.

Match of the Year
The World Cup served some absolutely classic encounters; New Zealand’s annihilation of France - who also put on a classic against England at "Super Saturday" - a battered Wales picking themselves up to just edge England, Scotland losing to the Wallabies due to a last minute controversial decision, the list goes on. There have been few better or more memorable than Japan v South Africa though. When Karne Hesketh scored with time up on the clock, rugby history was written.

Tit of the Year
England centre Jonathan Joseph’s year started well, but injury forced him out of the World Cup even earlier than his team mates. He picks up this award though for cheating on his girlfriend of seven years with “celebrity” Casey Bachelor who then sold her story to the press. 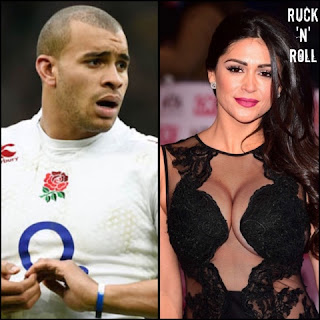 Twit of the Year
Joe Marler. Why? The only person to ever block the Ruck 'n' Roll twitter account.

Twat of the Year
Yoann Huget the winner for his little show against Bath, storming into Bath players with his forearm and shoulder after play had stopped and then taking a dive and staying down as though injured, while physios treated a real injury a few feet away.
Tweeter of the Year
Rugby World journalist, Scrum V Radio expert, eighth best dressed man in Wales and now Paul Williams' informative, engaging and friendly social media makes him our Tweeter of the Year.


Tackle of the Year
Ayumu Goromaru was one of the stars of the World Cup, not least for his try saving tackle against Scotland. Julian Savea finally met his match in Michael Hooper's seemingly spring loaded shoulder. Jamie Roberts somehow managed to switch his 17 stone of weight from one foot to the other to thwart Tommy Bowe's near perfect angle running and defy all physics and logic for our tackle of the year.

Biggest Rise
Almost awarded to the tier two nations who came into the world cup and shook things up like you would never have believed. It would be unfair on All Blacks winger Nehe Milner-Skudder though who burst onto the international scene, ripped defences to shreds and helped land the Webb-Ellis trophy. Not a bad year for man nicknamed “The Bus.” Eddie Jones hasn’t had a bad year either.

Biggest Fall
Stuart Lancaster’s year end on a very big low, his England squad crashing out of their own World Cup in the pool stage before getting the sack and replaced by Eddie Jones. However, it is league convert Sam Burgess takes the award. Last year Slammin’ Sam filled the back pages as English rugby’s saviour, the red rose’s Sonny Bill. By the end of this year he was back at South Sydney playing the 13 man code having been pushed too fast and messed around too often by his club and country.

Rugby War Goddess of the Year
As the award is named after Georgia Page it only seems fair she takes the award. The Aussie took social media by storm after breaking her nose playing for Lindenwood University, but finishing her defensive duties before getting patched up and returning for the second half. Plenty of competition for her, not least Sent from my iPhone

Caitlin McArdle who dislocated her finger in the first ever televised women's variety match and popped it back in to carry on with little fuss. 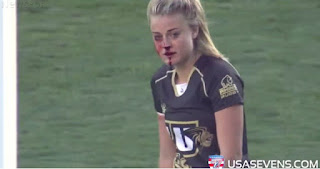 Most Emotional Farewells
It was the year international rugby said goodbye to Mike Phillips, Paul O’Connell, Dan Carter and Richie McCaw. We also had the sad passings of John Gainsford, Charlie Thomas, Jim McCarthy, Norm Berryman, Lily Partridge, Danny Kelly, Aaron Kohring, Mike Stofile and Jonny “Spud” Thomas among many others. However, few were felt as far and wide as the passing of All Black greats Jerry Collins and the game changing Jonah Lomu.

Cameo of the Year
Lloyd Williams’ appearance against England… on the wing! A scrum half by trade and a winger by necessity. With Wales suffering a freak number of injuries in the build up and during their vital head-to-head with their biggest rivals, Brynmor’s boy was to make an appearance on the left wing. Cue a burst on the outside, a defence splitting kick that would make Andrea Pirlo blush and Gareth Davies collecting to setup and unlikely victory.

Twitter Spat of the Year
AAC and BOD traded blows on social media, Tom Wood and Dave Ward fell out over the treatment of England captain Chris Robshaw and a full openside battle kicked off between James Haskell, Lewis Moody and Neil Back.

Worst Decision of the Year
Plenty who would see Chris Robshaw take the award for shunning the three points against Wales but, whoever called front ball from the subsequent lineout as some questions to answer.

That's all for part one, more awards will follow shortly in part two.

2015 was dominated by New Zealand. In homage to them, here is The Rolling Stones with Paint It Black.
No comments: