Despite the anger of Welsh football fans who took to social media last Monday (if only they had taken to the telephones with the same enthusiasm), Mr Daniel Biggar was indeed a worthy winner Welsh Sports Personality of the Year.

In recent years Biggar has shaken off any doubts about his suitability for international rugby to become a sure starter for Wales and a lynchpin in the team. He has grown and matured to earn a kind of stability in his position that is almost unique; arguably, only Ospreys teammate Alun Wyn Jones as the same kind of hold on his red jersey.

However, modern rugby is longer a fifteen man sport. Often the difference between victory in defeat is the eight men waiting on the bench. Now with Rhys Priestland's sabbatical - a conspiracy theory of which is another conversation for another time - the role of Dan Biggar's replacement is far from as certain.

Gareth Anscombe is a likely candidate for the Six Nations, as something of a pet project for Warren Gatland.  Meanwhile, Anscombe's Blues teammate Rhys Patchell has impressed at times, but the regions' inconsistency in his selection has slightly hampered his development. A move to the Scarlets - with a regular 10 spot and a firing back division - could seriously boost his international ambitions, but that isn’t happening until next season.

Across the border James Hook and Matthew Morgan continue to impress for Gloucester and Bristol respectively. However, international rugby is a different beast; in a world where one mistake can cost you everything, flair and cavalier attitudes seldom overcome the solid and consistent.

There is though, one man who has shown the consistent AND the verve in the past twelve months. Whilst Dan Biggar has been making the legendary Wales 10 jersey his own, his Ospreys jersey has been kept warm by a talent whose rise could be as meteoric. 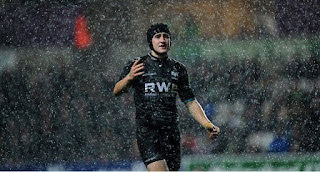 In Biggar's absence, Sam Davies has been majestic. Though the Ospreys may have struggled without their big names during the World Cup period, Davies rose to the challenge with a maturity and consistency beyond his 22 years. He has been solid and dependable, but remained creative.

Davies’ rise to prominence will come as a shock to nobody aware of his pedigree. The son of former Wales centre and coach Nigel Davies, who carved out his career at Llanelli, Sam has become a firm favourite with fans at their rivals Swansea RFC and the Ospreys.

It was his performances in the red of Wales that really caught the eye, however. As the Wales Under 20s team marched to the Junior World Cup final in 2013, Davies was integral to the team. His performance in France earned him the IRB Junior Player of the Year award and plaudits from around the globe.

However, all too often we have seen potential unfulfilled and talent wasted. Young players often find the step up, a step too far; Davies has taken it in his stride. It’s too soon for the inevitable bombastic comparisons from some of the media - “The next Neil Jenkins/Dan Carter/Barry John” – but Davies is certainly good enough to do for his country what he has for his region and offer cover for Dan Biggar. His laser left boot and

Davies did look uncomfortable against Bordeaux, switched to the unfamiliar outside centre channel more suited to his father. However, when given the 10 berth, Davies has given the Ospreys a creative spark not previously aggregated with the region. There can be no better example than the torrid Welsh derby against the Blues. Davies replaced Biggar at half time to open up the game and turn the dreadful into the entertaining. Despite only playing one half, Davies was awarded Man of the Match… and nobody could argue with the decision.

So, come the first Sunday in February, should Wales be chasing the game against Ireland and in need of a little inspiration, Davies is the man I would want on my bench.


The Killers - When You Were Young
No comments: