We are one game into the World Cup warm up campaign and, while  Ireland galloped out of the stalls like green clad thoroughbreds, Wales limped along as though making their way to the glue factory. But, what should we take from the Irish defeat? Not a lot to frank.

Wales played like what they were; a mish-mash of players, thrown together with little experience or understanding of each other. The cohesion among the team was virtually non-existent and maybe a trip to the glue factory may have at least succeeded in get them to stick together. Communication was as woeful as you’d expect of pairings brought together for the first time. Early on in the match, Welsh players drifted away from each other allowing the Irish to stroll through, like a particularly serene Moses through a Red Sea of defenders.

Up front things were no better. The scrum creaked and groaned with all the stability of a ginger bread house left in the rain, whilst the lineout misfired more than an evil henchman in a Bond film. A functioning lineout can be bore out of repetition; “We are what repeatedly do,” said Aristotle. Wales have not yet begun to work on the finer sides of rugby, let alone do them repeatedly. Expect the set piece to be repeated ad nausem until September, until excellence becomes an habit. 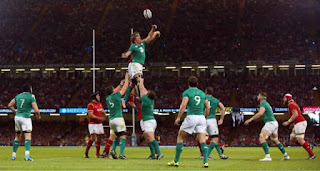 However, without it may be without Richard Hibbard. The golden haired hooker has become something of a cult hero with Welsh fans with his bone crushing tackles. But Hibbard has struggled to find the form that got him into a Lions shirt. He now finds himself behind Ken Owens and Scott Baldwin in the pecking order, with Kristian Dacey snapping at his heels. Experience may be enough to drag Hibbard into the final squad, but his form will need to improve greatly if he wants more involvement than that.

At the breakdown, Ireland dominated with play that wasn’t always legal, but was most effective. The men from the Emerald Isle slowed down Welsh ball until it was near stationary. It was Ireland’s playground and they decided who played with the ball. Wales dearly missed their captain Sam Warburton and their talismanic Alun Wyn Jones at the breakdown - not to mention Gethin Jenkins who has had more success at the ruck from prop than plenty of flankers have over the same period.

Ireland’s greater experience in the pack showed and Ross, Ryan and Heaslip choked the life Wales. Expect Wales to be more streetwise by the time England and Australia meet them, but - with Hooper and Pocock lining up for the Wallabies - they will need to be.

Behind the woeful forwards were error strewn backs. Ireland’s slowing down of the ball forced Wales’ hand, forced them into passes that were a bit too much, a bit too soon. That led to spilt passes which ironically led to further exposure of their scrum and ruck, it was a rugby style Catch-22… and drop plenty more than that.

James Hook’s performance at 10 will serve to quell the fanatics who have questioned his omissions from previous selections, whilst Mike Phillips may also find himself precariously close to the executioners axe. The biggest injustice of such decisions would be that it took such an insignificant, muddled match for the cut to come. The pair’s performance when among the first team have been little more than lacklustre for sometime and it would seem unfortunate that the straw to break the camels back would come in a game where everybody was so poor there was little they could conjure between them.
Phillips did at least build a little momentum for Wales before half time with strong running from a quick tap, but Hook spent too long looking for the miracle pass or trying to dissect defences with the show and go. It was like watching a boxer looking for the knockout with every punch, whilst his opponent jabbed the fight away from him.

That said, not everything from Wales was terrible. Justin Tipuric’s try bordered on the magnificent, whilst Hibbard’s crossing was a beacon of hope at the lineout and proof off the ‘heads up rugby’ that has let them down at times. Though the lineout didn’t function as it can, Dominic Day’s work rate was superb. Wales Online’s reader vote harshly gave him a rating of 4.1, betraying the 17 tackles made by the giant Bath lock - the second best in the game - as he worked tirelessly in the face of relentless Irish traffic. 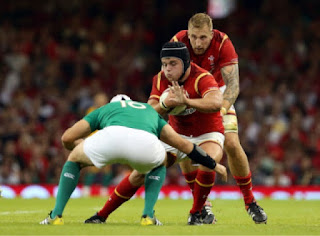 Ross Moriarty was slow to get going, but when he did his ball carrying ability came to the fore. Wales have lacked a hulking bulk of ball carrying ability at blindside for some time and Moriarty could be the remedy. The Gloucester man will also feel very unlucky to have spent 10 minutes in the sin bin for a “swinging arm” that was little more than Simon Zebo slipping as the flankers arms came around to wrap up the Munster winger.

However, it’s very difficult to read much into the game. With such a large number of changes, especially in key positions, it would always be a big ask for Wales to get going. Further more, expect any appearances at the World Cup to be limited – with the exceptions of Scott Williams, Jake Ball and Justin Tipuric. Unlike Wales’ 2011 World Cup pool, there is little room for resting star names. Four years ago, the schedule was such that the Namibia game allowed to the starting fifteen to rest up and nurse sores; this time around Wales start with Uruguay and see Fiji sandwiched between games against The Wallabies and the Old Enemy. Any thoughts of resting too many players against Fiji will instantly conjure memories of last November’s dire show against the Fijians and the bewitching but terrible defeat in 2007.

So, while some may fret over the result and the performance on Saturday, it will have given Gatland and his staff an insight into some of their players and made a few decisions easier when it comes to cutting the squad. It will also give them some insight on what they will need to work before the World Cup and with the tournament just one month away… Nothing Else Matters.
Metallica - Nothing Else Matters
No comments: