It was November 2008 in Cardiff. Piri Weepu stalked between his fellow countrymen bellowing ferociously as they eyed their opponent. Twenty two players clad in red lined up across their 10 metre line, meeting the stares of the men the will soon do battle with. The Haka finished with mighty roars; first from the All Blacks, then from the appreciative crowd. Referee Jonathan Kaplan wandered between the two teams in preparation for kick off, but a battle had already started. Wales stood and stared, unflinching under the gaze of their enemy. The All Blacks stared back, Ma’a Nonu standing like a bull ready to charge the red before him. Kaplan was in no man’s land, trapped between two armies ready for war.

Suddenly, everything was raised; the crowd, the noise, the tension, the hairs on the back of the neck. The picture was barely believable. For a week the talk had been about a Welsh response to the Maori dance, but there was no response and it was the best response of all. It was a staring contest and nobody wanted to blink first. The 'stare down' lasted only a little over a minute, but it felt like forever in the giddy excitement and anticipation of what might happen. Kaplan wandered captain to captain pleading, demanding and threatening. Ryan Jones remained defiant - “we aren’t moving until they do.”He revealed to Wales Online - in a fantastic article by Gareth Griffiths - that in the build up the game Warren Gatland had explained the importance and traditions of the Haka. The Kiwi coach of Wales had stated the Haka isn't over until the opponents turn away. With that in mind Wales decided that, whilst Australia had turned their back on the Haka, they would refuse to turn their backs to it even after it was complete. Jones said, “we were adamant we weren’t going to move first. The Millennium Stadium was our home patch and we would not budge.” 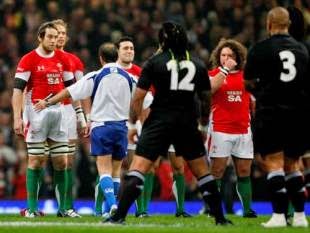 New Zealand blinked first. Some players wheeled away toward their positions and, as Ryan Jones puts it, Wales “had won the Haka.”It is fitting that such a memorable response is completed at the venue of one of the most influential Haka responses. Over a century before the stare down, New Zealand had brought the Haka to Cardiff for the first time. It was the first touring All Blacks team, now nicknamed ‘The Originals.’ New Zealand performed the Haka to a packed out National Stadium before Welsh player Teddy Morgan led the crowd in a rousing rendition of Hen Wlad Fy Nhadau in response. It would lead to national anthems being sung in future sporting events. It was some time later in 1987, and under "Buck" Shelford's suggestion, that New Zealand would begin to practice the Haka and perform it on home soil. It transformed into an entirely different beast, one that embodied the passion and tradition of New Zealand as well as their incredible teamwork. Some see that exhibition of athleticism and passion in unity as little more than an exercise in intimidation. Ex-England hooker Brian Moore is not one to mince his words. When talking about this apparent intimidation to his England teammates he said, "if anyone was truly intimidated by the haka they shouldn’t be on the field in the first place."

Will Greenwood says teams should take the energy created by the Haka "absorb it, internalise it and ultimately turn" it against them. Just as the controversial 'throat slitting' action of was to draw power from the sky, opponents should draw power from the confrontation.  Adrenaline is the 'fight or flight hormone' and when the blood rushes in the face of a raging opponent, no international sportsman should choose flight. If you let the All Blacks get a psychological advantage from it, then you have no business playing international rugby. When asked how the Haka affected him, Moore tweeted "How did I feel facing the Haka? Like a wanted to kill someone. (Metaphorically of course)." Shelford is keen to point out that while the All Blacks are perceived to have the psychological advantage due to the Haka, it's their ability after the ref's whistle that sets them apart. He says, "the haka doesn't win us a game of rugby. Rugby wins rugby." That didn't stop Ireland's Willie Armstrong trying to give the apple cart a good shake in 1989. The Irish players linked arms to face the Haka before Willie Anderson dragged them forward leading his troops into the faces of the All Blacks. Anderson finished nose-to-nose with Shelford and when the Kiwi turned away he called on the Dublin crowd to celebrate. Despite all the talk of over sensitivity toward Haka responses both Shelford and Anderson say the Irish actions were treated with nothing but praise. Anderson told the New Zealand Herald, "(Shelford's) view was that they threw the gauntlet down and we picked it up."

Perhaps the most controversial response was current Leicester Tigers coach Richard Cockerill. In 1997 Cockerill was due to make his first start for England. It was as big as they come, the All Blacks at Twickenham. During the Haka, Cockerill had a rush of blood to the head. While his teammates watched he got in the face of opponent Norm Hewitt. Cockerill was largely lambasted for his actions and many claimed it was disrespectful. However, he maintains that the All Blacks  he spoke to after the game "loved it" and that passion and confrontation is part of their rugby culture. In fact, responses to the Haka have generally been well received by New Zealand's finest. Ryan Jones says the 'Stare Off' was so well respected, New Zealand TV channels were still showing it 3 years later during the World Cup. At the final of that World Cup France encroached beyond their given point and were slapped with a fine. It's worth remembering any fines are the decision of the IRB not the All Blacks. After France were sanctioned, New Zealand's team manager Darren Shand spoke out against the decision. There are 39 million sheep in New Zealand, but the bleating about the Haka tends to come from elsewhere. Whether you love it or hate, when Wales face the Haka on Saturday, respect it. Give it the time and attention it deserves. The only response that matters though is the one between the first whistle and the last.
AC/DC - Back in Black