Smiling Through the Dark Days

Sometimes on the roller coaster ride of rugby it can be easy to lose sight of things that are a whole lot more important. Missing somewhere between an awe inspiring reverse cat flap and the seventh consecutive collapsed scrum. In amongst a 79th minute winning try and the dodgy hands of your ball fumbling winger it leaves us. Amid the ecstasy and agony that present themselves within eighty minutes, week after week and season after season it disappears.

As we become enveloped and engrossed in the game that we hold so dear and we forget that there are things far more precious. It's something that Matthew Rees will not need to be told.

If the Blues and Wales hooker had lost any perception of the importance or fragility of mortality he was given a stark reminder. In October the former Scarlet and Celtic Warrior was diagnosed with testicular cancer. This time cancer picked the wrong fight.

Rees proved to be as dogged off the field as he is on it. His determined personality has seen him rise through the ranks, from club rugby to region and onto Welsh captaincy and test starting British Lion. All the while his affable nature landed him the nickname 'Smiler.' Both traits have helped him considerably in a battle against a terrible disease.

In the latter part of last year Rees underwent surgery and chemotherapy at Cardiff's Velindre hospital. This weekend, just five months after missing his first game, Smiler returned to action in regional colours of the Blues. It was that capital region's last game at Cardiff Arms Park this season and the return of their skipper helped them pull off a shock result against Ulster to rival their victory against Toulon. Despite the surprise victory, the biggest cheer of the day was reserved for the remarkable return of the man from Tonyrefail.

After the game it was true testament to Rees to have Blues' caretaker coach Dale McIntosh speak of him in glowing terms. "I would say there was added inspiration in Matthew Rees, the guy's an icon," said the Welsh/Maori. "We look at him and he's an example to us all," added 'The Chief, who himself knows all about being an icon. Few people at any club are held in the same regard as McIntosh is at Pontypridd and it was at Sardis Road he and Rees played together. 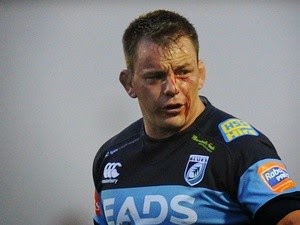 Rugby reacted to the news in the only way it knew how, pulling together to give support and a little bit of ribbing. Rees received messages from across the globe, his team mates shaved their heads and on BBC's Scrum V Kingsley Jones told of how he teased him about his chances of making a World Cup squad while Martyn Williams poked fun at him "carrying a bit of weight." Rees says that's what rugby is all about; "As much as on the field you want to kill each other, you come off and, when things like this happen, everyone just gets together."

There has been no time to rest for Rees though; no time to dwell or mope. He has worked solidly during his enforced lay off and pushed himself as hard as possible to return before the season was out. He says rugby played a big part in preparing him physically and mentally for the most ultimate of battles, "rugby gives you certain values and that's probably carried me through the past five or six months."

It's hard to think what may have happened had he not had that rugby element in his life through those 'dark days,' but rugby can certainly be grateful to have people like Matthew Rees in it's game.

It's almost impossible to pin point exactly what makes a good man, but whatever it is Rees has it in abundance and all associated with the sport will be glad to see the man and that smile take to the pitch again.


The Heavy - What Makes a Good Man


To donate to the Velindre Cancer Centre who helped care for Matthew and continue to care for countless others on a daily basis, please click here.