After part one of the Ruck 'n' Roll Awards the awards keep coming here, so let's find out who else will get lucky.

Beast of the Year
Bismarck du Plessis' hit on Carter and Hibbard's hit on just about anything that moved made them contenders. Ma Nonu's straight running is just as brutal, but George North was simply phenomenal. Huge hits, rhino-esque runs and carrying Israel Folua down field like a hiker with a knapsack.

Stop the Bus Award
On their way to to a preseason game against the Ospreys Worcester Warriors team bus caught fire just outside Bristol. That was nothing compared to Danny Cipriani who managed stop a bus in a far more simple way by mistiming a run across a Leeds road and being hit by the double decker to Guiseley.


Happiest Welshman of the Year
Jiffy, because a picture speaks a thousand words. 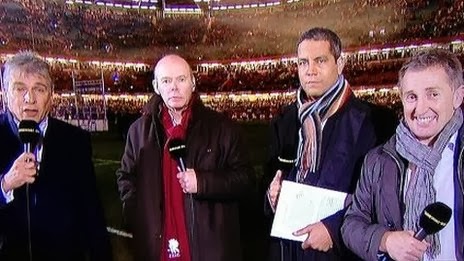 The Harry Houdini Award for Escapology
There is no doubting the intensity with which Bismarck du Plessis plays the game, but the Springboks and Sharks hooker can sometimes overstep the mark. The decision to send him off against the All Black was rightly reversed, but the decision not to ban him for a blatant stamp on Lappies Labuschagne was ludicrous.

Musician of the Year
As a rugby player and doctor Jamie Roberts is already a multi-talented man and in in Melbourne he added guitarist with the Manics when he joined the Blackwood band on stage to play "You Love Us." Teammates Alex Corbisiero and Simon Zebo showed their vocal skills in Oz.

Dancer of the Year
Forget Ben Cohen on Strictly, Jon 'Foxy' Davies did a breakdance to cross the try line against Newport-Gwent Dragons at Judgement Day. Not even Ylvis could find a fox with moves like the Welsh centre.


Okey Cokey Dancer of the Year
An award split between the English, French and Welsh teams. When it came to negotiating European competition they couldn't decide where they wanted to be. They were in, they were out, they shook everything about

Lazarus Award for Comebacks
New Zealand's comback against Ireland was incredible and Wales' Six Nations turnaround was fairytale, but Quade Cooper's return to the Wallabies line up with some inspired performances in the Autumn Internationals.

Worst Fighter of the Year
No contest for this one. Gavin Henson made the headlines at his new club Bath before a ball was even kicked when he was knocked out by teammate Carl Fearns on a team night out.


He's a Good Guy Really Award
When Mike Phillips tweeted a chance to get taken for coffee by the Welsh Lothario many thought it may have been a ploy to lure in the beautiful women of Wales. So, when his teammates cottoned on to his ploy Mike threw a dummy and choose instead to meet children for the "Follow Your Dreams" charity.

The Kenneth Williams Award for Sexual Innuendo
Commentary after that cracking Championship decider at Ellis Park, "The players are on their knees and Nigel Owens is blowing hard."

Warrior(s) of the Year
We wish all the best to Matthew Rees and Matthew Watkins in their respective fights against illness. To hear Joost van der Westheizen talking so openly and candidly about his fight with motor neurone whilst seeing the devastating effects on the former 'Boks scrum half. Joost remains committed to fighting his disease and helping other suffers through his charity.