The tradition of Boxing Day comes from employers giving boxed gifts to their servants. Modern day, the tradition is to hit the sales or else nurse hangovers and gorge on day old turkey. Welsh rugby has started it's own traditions with annual Boxing Day derbies where any Christmas spirit is felt at on the bus and goodwill takes it's leave until the final whistle blows.

Before kick off both sets of fans were united as together they stood firm in the face of uncertainty. Bitterest rivals, bonded by their love of their regions and the uncertain future they face amid rifts with the WRU. As the empire threatened to crumble, the gladiators entered the Colosseum. Off the field things were less gladiatorial and more pantomime.
The home fans had already cast their panto villain on the pitch though and voiced their opinion every time Hanno Dirksen touched the ball.

For every villain there must be a hero and Liam Williams strode confidently, if a little bow legged, into the role. Williams is building something of a cult status at Parc Y Scarlets and only further enhanced with an all action opening.

Many of the Ospreys usual influential stars looked some what off colour. The usually dependable and talismanic Hibbard played his team into trouble early on with a miss placed pass near his own line. Later Aaron Shingler, who was in fine form, rode a hit from the Port Talbot wrecking ball and managed to put the blonde hooker on his backside. 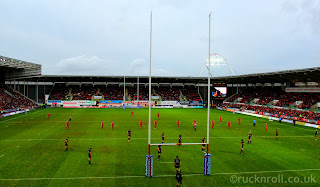 Ospreys scrum half Rhys Webb sniped around the ruck to dart through a red line of defenders, but found few in support. All the while Rhys Priestland put the Scarlets first points on the board before Kiwi winger Frazier Climo rattled the posts with a long range effort that almost shook the sosbans from the top.

At the other end, Dan Biggar had opportunities to level the scores. After 35 successful attempts at goal, a penalty went wayward and the Ospreys were left ruing their deserting luck. Their forwards continued to reign at the breakdown however to dominate possession and the tactical kicking of Biggar and Sam Davies meant they seized the majority of the territory too.

The game continued at a relentless pace. Any pressure relieving kicks were run back fast and strong. Tap penalties and quick line outs gave no time for respite or breath catching for player, fans or commentators.

Defenders shot out of the line like human cannonballs and slammed into attackers, forcing errors and preventing either team building any sort of momentum. Both sets of defences were impressive and appeared unbreachable whilst the niggle of a derby bubbled away under the surface. Adam Jones clashed with Rob McCusker, Dirksen and Liam Williams renewed their rivalry whilst Alun Wyn Jones and John Barclay taunted and tormented all game. 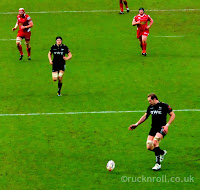 In the stands the fans were just as equally matched; Every chant of "Scarlets" countered with an "Ospreys," every "Ole" drowned out by an "Yma O Hyd."

When the half time whistle went the players were grateful for the break, but the fans were thirsty for more. The low 3-0 scoreline betrayed the thrill and excitement of the first period.
After the break, the battle took it's toll; Liam Williams and Hibbard departed with injuries and Ken Owens would later follow. Priestland added three more points whilst Biggar's run of consecutive successful kicks turned into two consecutive misses.

With no Liam Williams to counter act him, Dirksen seized the opportunity to take centre stage. Beck, Biggar and Davies combined to set the South African into acres of space to run in a try. Kristian Phillips and Scott Williams with all their might to stop him, but the winger dived over. 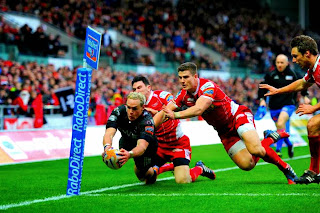 The Scarlets appealed to the officials that the peroxide 'Bok was in touch. "Oh no he wasn't," the Ospreys opined. "Oh yes he was" ruled the TMO, no try. The scores remained 6-0, at least until Biggar found his kicking boots to bring the Ospreys within three points and it was the Welsh outside half would decide the game's fate.

With the clock running down, Biggar spiraled a kick into touch near the Scarlets line. A catch and drive sent Ian Evans crashing over with Biggar adding the extra. The visitors led by four points with five minutes remaining.

The task laid down for the Scarlets was a big one, but they set about it immediately with rolling mauls of their own. One maul followed another as Ospreys tried to repel attacks and captain Alun Wyn Jones saw yellow for his attempts to prevent a match winning try.

The resultant penalty meant a final lineout and a final Scarlets attempt to cross the whitewash. They bombarded the Ospreys line for 21 phases before Sam Lewis turned the ball over and slammed it off the park.

Another example of so close yet so far for the Scarlets as another victory for the Ospreys who move to second in the league. However, both drew attention away from all that has happened off the field, in boardrooms and press conferences and to the real entertainment on the pitch.