Wales v 'Boks: Where the Game Was Lost

One game, one defeat. No embarrassment in losing to the second best team in the world, but for Welsh fans it's a piece of history that has been repeated more than 'Only Fool's and Horses' on UK Gold. So, where did it go wrong?

One Up Runners
Ironic that with so many Welshmen touring with their British and Irish counterparts this summer, it was South Africa who acted like lions. When a Welshman wasn't properly supported they sensed his isolation from the pack and pounced.
Nineteen turnovers speaks volumes for just how well the Springboks acted at the tackle area, especially when you see how strong Warburton looked when present at the breakdown. The support may have come just a second behind, but a second is enough against such a proficient backrow and Wales paid the price.

Injuries
It's easy to pin the blame on injuries, but any team who lose so many influential players so early would feel the effect. Adam Jones is the lynchpin of the scrum and Liam Williams brings some much needed fiestiness to the backs, but Lions centre Jonathan Davies was the biggest loss.
The man they call Foxy showed more attacking prowess and offensive guile than any other player in the Welsh 23. Davies evaded capture like the Scarlet(s) Pimpernel, where other Welsh attack resembled the Phantom Raspberry Blower of Old London Town.

Wasted Chances
Wales took the lion's share of possession, but failed to score a single try and threatened the white line less than Tony Montana.
Be it over coaching, lack of vision or too much commitment to Gatland's plan; Wales butchered opportunities with a few bad choices that could have changed the game. They refused to throw the ball wide when the 'Boks defended narrow and Fourie followed de Villiers as though tethered to his captain. Instead they stuck rigidly to earning the right to go around, even if South Africa couldn't have made it more inviting if they had laid a red carpet and offered canapés.
Though ironically, Wales' lack of vision and invention was best summed up by going wide too soon. James Hook was presented with acres of space guarded either side by two forwards from the tight five. Instead of using dancing feet that would make Fred Astaire drool, Hook failed to commit a man and threw an inaccurate pass behind Ashley Beck. Play disrupted, chance gone and the men in red consigned to defeat.
A bit more thought, a bit more confidence and a bit more composure and the result could have been different. 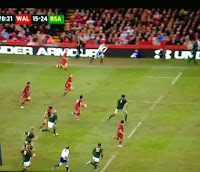 Out Muscled
South Africa may have added some expansive rugby in their back division, but that doesn't mean they have lost any brute force from the pack. Wales have spent much of the Gatland era playing a highly physical, collision based game (the fabled Gatlandball). However this is where the Springboks are kings and rarely are South Africa bullied, but that is what Wales set out to do. The game could have deteriorated into a slugfest and arguably did a little in the second half.
Wales have had success with this tactic against the same opponents before at the World Cup, at least in terms of game performance if not result. Again they decided to stand toe-to-toe and trade heavy blows with rugby's heavyweights with Hibbard throwing the biggest haymakers. Wales found themselves floored three times, but failed to do anything more than bloody South African noses.
Wales though, have the ability to be boxers as well as fighters - they can use lateral movement and footwork to wear down opponents. The All Blacks are the only team to beat South Africa and did so by opening up the game and playing with a little flair. Next time, a little more Ali and a little less Foreman is needed. 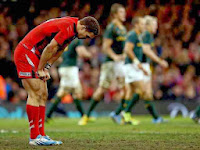 The Truth...
We weren't too bad. It's not too long ago that Wales were a giant leap behind the boys below the equator, but now we are just several small steps behind the Southen Hemisphere sides.
As it stands, we are trying a little too hard and not believing quite enough. A win or two and the shift will come and then Wales can count themselves among the best in the world.
Until then, it's just a little bit of history repeating.
Propeller Heads and Shirley Bassey - History Repeating