On the weekend of the 19th (and possibly final) Heineken Cup, Ruck 'n' Roll take a look at the group stages of this year's tournament.

Pool 1: Castres, Leinster, Northampton, Ospreys
It seems that every competition has to have a "Group of Death" and Pool 1 fits the bill with ease. You won't find such a prospect of entertainment from so many Lions without a trip to Longleat, even the French club have one of Gatland's boys in their ranks.
The European form and domestic form of Castres don't match up. Last year's Top 14 champions have trouble away from home and while that is par for the course in France it doesn't wash in Europe. That's why the French title holders are ranked 25th in the ERC rankings. It also means that they are the tier 4 team in the group.
Conversely, Leinster top the ERC rankings. European success has flowed through Dublin like Guinness. Three Heineken Cups in five years is a testament to just how tricky an opponent Leinster can be. Even last season's injury ravaged poor performances eventually led to an Amlin Challenge Cup title. Leinster are going through something of a transition, but in Brian O'Driscoll's final year, they will want to send their talisman off in style.
Northampton are a team on form at the moment. Powerful upfront, strong and skilful behind, The Saints are a team to be reckoned with. After they reached the Aviva Premiership final last season they have started this campaign in similar form and added to of the summer's most lauded players in Alex Corbisiero and 'Gogzilla' George North.
Swansea based Ospreys are perhaps Europe's biggest underachievers. 4 times 'Celtic' League winners and chocked full of internationals and Lions, the Ospreys have rarely cut the mustard on the continent. If they click the Ospreys have the ability to compete with any opponent, but they will need to do it quickly to have any chance of progressing.
Verdict: So difficult is this group it's virtually impossible to see two teams qualifying. Winning bonus points will be few between, but don't rule out the the runner-up winner the Amlin Cup.
Winner: Northampton Saints
Runner-up: Leinster 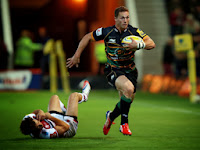 Pool 2: Blues, Exeter, Glasgow, Toulon
The Blues are a perfect example of the phrases "great on paper, but not on grass" (or plastic in their case), with the likes of Sam Warburton, Leigh Halfpenny and Alex Cuthbert in their ranks. The Blues are struggling to find any sort of form and another poor performance this year could convince some of their internationals leave for Gallic shores. Matthew Rees and Gethin Jenkins have bolstered a weak pack, but it's an area where the have the depth of a puddle in August.
At the other of the scale are Exeter, a team bigger than than their individual parts. With little in the way of superstars, The Chiefs are a collective force who deserve their place in this years show piece. They will have learnt from their debut last year, but it will be a big ask against in form Glasgow and the Northern Hemisphere's Galacticos.
Glasgow remain undefeated this season and are yet to concede a first half try. They have rode their luck at times though and scrapped through last weekend as Scarlets squandered chances. They will need to upset Toulon on get big bonuses if they want to qualify and I cannot see it happening.
What can be said of Toulon? A veritable who's who of rugby. Their players read more like a hall of fame than a squad list. They enter the tournament as champions and it will take a brave man to bet against them repeating that feet.
Verdict: It difficult to look past Toulon in this group and it could descend into a race for an Amlin Cup spot between Glasgow and Exeter.
Winner: Toulon
Runner-up: Glasgow

Pool 3: Connacht, Saracens, Toulouse, Zebre
It would be a shock if two teams didn't progress from this group. Saracens and Toulouse will be expected to tear their way through this group.
Over the seasons Connacht have done little to shake their tag as Ireland's fourth team. They have stole home victories against Harlequins and Biarritz before though so it could happen again.
Saracens are purveyors of direct rugby, playing in relentless waves of physicality. All three opponents may not be able to cope with the London club's strength.
Toulouse have got progressively worse since they won the tournament in 2010, but it would take something drastic for that trend to continue and them to not at least reach the knockout stages.
No Italian club has made a mark on the competition yet and it is unlikely Zebre will do it this time around. The Parma based team have improved significantly over the past 12 months and finally got a "W" to their name, but there is precious little chance of the finishing in the top two. They will give it their best though and even one European win would a huge success.
Verdict: Saracens and Toulouse to do the business. Any upsets are unlikely but not impossible.
Winner: Saracens
Runner-up: Toulouse

So, there's the first three pools. Pools 4-6 are here.