This weekend the Rabo Direct Pro 12 kicks off with the finest teams from Ireland, Italy, Scotland and Wales battle it out for the title. Here is a quick rundown of each team and the players to keep an eye on this season.
Benetton Treviso
The Italians have continued to improve since their induction into the Celtic League and are more than able to compete with any team in the Pro 12 on their day. They have sprung the odd upset in the past and blew away the Scarlets as the regular season drew to a close.
With little bit of luck and added consistency they could finally make their mark on the competition.The playoffs may be a step too far but a top half finish is certainly acheivable.
One To Watch: Their star man must be Alessandro Zanni. Often unsung for Italy as praise is heaped on Sergio Parisse, but some regard Zanni as the better man. When not running at defences he scrapping for possession at the ruck. ﻿﻿﻿﻿

The Blues have made some significant changes since their disappointing performance last term. A new pitch will at least stop Cardiff Arms Park becoming the quagmire is was last season.
Two thirds of a former Lions front row have been brought in to shore up a faltering scrum. Gethin Jenkins is a welcome return and Matthew Rees takes hold of the captains arm band bringing in much need reinforcement.
One to Watch: After being named player of the Six Nations and Man of the Series on the Lions tour, Leigh Halfpenny is still the man to watch. Halfpenny is world rugby's in form player with pin point accuracy with the boot, sparkling in attack and is the bravest of defenders.

Connacht
Ireland's fourth province have been working hard to make some ground on their countrymen for some time. Whilst Ireland's big three have been winning titles and conquering Europe, Connacht have struggled to keep up.
Now Connacht will be hoping the tide will turn. Last year they finished just two places behind Munster and will set their sights on trying to narrow the gap further this time around. They have made wholesale changes this summer with 12 leaving and 13 new faces.
One to Watch: Craig Clarke, a behemoth of a man who was captain of the Chiefs team in Super Rugby that took the title two years on the bounce. To say he is a coup is an understatement as big as the man himself. Connacht don't have the attraction that Leinster currently carry and signing a player of Clarke's quality and standing is a deal to be applauded.

Edinburgh
A terrible season just passed for Edinburgh which culminated in a 10th place finish and an inability to compete with their Glasgow rivals.
A few savvy signings in the summer should have made them more competitive this time but they have a big mountain to climb to bridge the gap between themselves and their fellow country men.
They will again look to 'Flying Dutchman' turned 'Flying Scotsman' Tim Visser to bag them tries. Forget talk of Chris Robshaw or James Hook, Visser was the unluckiest player not to tour with the Lions this year and Edinburgh will hope he spends this season showing Gatland and Co. what they missed.
One to Watch: Other than try machine Visser, young centre Matt Scott has started to show glimpses of the ability he holds and put in some big performances at the Six Nations. If he can continues on this path he may become a regular for an improving Scotland team.

Glasgow Warriors
What a season for Glasgow last year. They bagged a third place finish with some impressive performances and will be looking to emulate it this year.
Much of that success came in no small part to Niko Matawalu who proved to be the find of the season at scrum half. He will miss the start of the league this year but will be looking to make an impact upon his return.
One to Watch: Unfortunate to miss out on the initial Lions squad, Ryan Grant is proof that there are still props of the highest calibre coming off the production line. A solid scrummager and an even better ball carrier, Grant will be looking to make an impact from the front.

Leinster
Defending champions and top point scorers, big things are expected of Leinster again this year. Ulster will again be their biggest competitors for their crown and the Irish rivals may duke it out for the championship.
They have lost Sexton to French big spenders Racing Metro, but Ian Madigan is chomping at the bit for an opportunity to make the number 10 shirt his own. The signing of Zane Kirchner is also a significant one; a current South African international with heaps of ability, Kirchner could set the Pro 12 alight.
One to Watch: It's sink or swim time for Ian Madigan. Many feel he is the real deal and of international quality, now he gets the chance to prove it. Most will be betting on Madigan to prove himself and challenge Sexton for the Emerald jersey of Ireland at the same time. 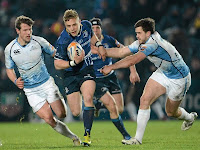 Munster
Munster will hope to put last season down to a blip. In terms of a play off position they were never really at the races, which is a rarity for the red quarter of Ireland.
This time around they have lost some of the old guard, but are still expected to be contenders when the end of the season rolls around. The talismanic Paul O'Connell has stayed though and if you ever need a leader to guide you from the mire, O'Connell is it.
One to Watch: Fleet footed winger with the promise of tries, Simon Zebo is an exciting prospect. Zebo announced his arrival on the international scene with an audacious bit of trickery against Wales and expectation will be on him this year to live up to his billing.

Newport Gwent-Dragons
Widely considered Wales' least competitive region, Dragons have done little in recent seasons to shake that tag. This summer they have started something of a revolution, however. There are now new players, new coaches, new captain and whole new mentality at Rodney Parade.
Lyn and Kingsley Jones have come on board to guide the ship whilst Richie Rees, Jason Tovey and Kris Burton are among a few marquee signings. Ieuan Jones and Hallam Amos step up from the academy with a great deal of promise.
One to Watch: Their best piece of summer business was getting Toby Faletau to commit to a new contract. The Tongan born Welshman has shown great loyalty to his region despite reported interest from overseas. Faletau's rise has been meteoric and it's hard to believe he is still only 22. Already though he is gathering a fine selection of admirers with legends Graham Mourie, Sean Fitzpatrick and Pat Lam praising his ability and attitude.

Ospreys
After sneaking fourth place in the previous two seasons and claiming the title once, the Ospreys will be hugely disappointed at missing out on a playoff spot last season. They will want to be back in the top 4 this time around.
Their pack works as a well-oiled machine, able to compete in the set piece against the finest of opponents and in Adam Jones they have one of the World's best scrummagers.
One to Watch: For all their power in the tight 5, the Swansea based region have a real star on the flank in the form of Justin Tipuric. A scavenger at the breakdown, but with the technical ability the back division would be proud, Tipuric is already pushing Wales and Lions captain Sam Warburton for a starting spot internationally.

If the Ospreys are a team based on forward play there West Walian rivals are the flip side of the coin, playing the kind of back based flowing rugby their history demands. Much has been made of the loss of George North to Northampton, but the loss of Andrew Fenby will hurt the region just as badly.
The acquisition of John Barclay will add experience and battle to a sometimes weak pack. Simon Easterby has attempted to readdress the forward/back balance since taking the coaching role and it snatched them a playoff spot last year. This year they will want the same, at the very least.
One to Watch: The loss of North and Fenby will mean they need someone to step up and lead the attack from the backline. Liam Williams is quickly gathering a reputation in Wales and has already gained cult status at Parc Y Scarlets. An exciting runner with a solid tackle and a fiery personality, 'Sanjay' may get the chance to step up and lead by example.

Ulster
Another team with a strong back division. Ruan Pienaar and Paddy Jackson work together superbly as the fulcrum from which the whole team operates. With the likes of Bowe, Gilroy and Trimble in the back line it is hardly surprising they scored so many points last time out.
Last season they were pipped at the post by Irish rivals Leinster and this year they will want silverware. If they can keep their forwards solid and get their backs firing as they were last year, it will take good team to stop them lifting the title come spring.
One to Watch: There is no end of players to keep your on eyes on here, but purely for entertainment Nick Williams is the one to watch. A giant man with amazing strength and basketball player handling skills. It's not rare to see Williams swatting away opposition defenders whilst completing a one handed pass.

Zebre
The newest team in the competition following the folding of Aironi in the continually turbulent world of Italian club rugby. Zebre entered with competition last season and barely registered a whisper, let alone a bang. They lost all 22 of their games, but did pick up 10 bonus points along the way.
Out of season they have made all the right noises and reinforced the squad well, but still kept a focus on Italian talent. The losses of Tito Tebaldi and Carlo Festuccia are big but recruitment has been very good and they will enter the season feel equipped to improve on last seasons poor show.
One to Watch: No doubt about it, Brendan Leonard. He learnt his trade at Waikato before graduating to the all conquering Chiefs squad. Graham Henry called Leonard the "best attacking scrum half in the Super 14" back in 2007 when he battled Piri Weepu for the All Blacks jersey. Injuries weren't kind to Leonard after that, but regular rugby could get him firing again and get Zebre playing on the front foot.

Good luck to all teams, players, coaches and fans for the forthcoming season. It's been a long wait for club rugby to hit British and Irish shores again. The time is now upon us.
Moloko - The Time is Now