Phillips Fails to Keep Up with Roadrunner Genia

Before the first Lions test, many experts were predicting a pivotal battle between the scrum halves on show. As far as predictions go, it's up there with death, taxes and Lions fans hitting the bar pre and post match.

I'm often reminded by (mostly) female rugby fans of what a beautiful creature Mike Phillips is. There is no denying Mike's rugged good looks, husky eyes and strong, abiding confidence. 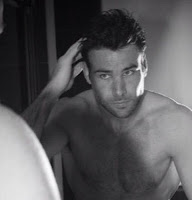 The Bancyfelin man is more than a handsome exterior though. He is the most physical and powerful of scrum halves, his strong runs able to decimate defences. Despite what his critics say he is capable of the traditional scrum half work of orchestrating attacks from rucks, mauls and set plays. Phillips rarely has good games, they are either great or... well, not. The first test was not.

Phillips Lions tour started in barnstorming fashion. In the cloying humidity of Hong Kong, he left the Barbarians gasping for air and grasping for anything as he powered his way through their defensive line and over the try line.

In comparison to Phillips, Will Genia was the pure definition of opposite. Opposite team, opposite number, opposite style and, most importantly, opposite performance.

Standing at just 5'8" and 13st, across from the giant frame of Phillips, Genia could not rely on physicality or strength to leave his mark. Fortunately, he had no intention of doing so.

Genia was all about speed. Not just the speed of his feet on the ground, but the speed of thought in his head. Where as the Australians knew Phillips' every move two days in advance, nobody knew what Genia was about to do next. 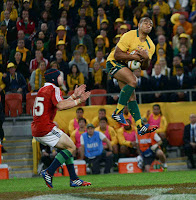 It is said that World Championship snooker players think 5 shots ahead. Lord knows how many phases in front of everyone else Genia was able to think on Saturday.

When the Lions switched off for just a second, Genia pounced. In a flash of gold and green, he was away. Teetering defence turned to meaningful attack, a direct run that tied Phillips up in knots and deft a kick to set Folau free to bag his first international try in the 15 man code. Phillips and co trailed in his wake like perplexed Wyle E. Coyotes outfoxed by roadrunner.

Genia was Australia's chief orchestrator, composer and brass section to boot. If one person did not deserve to be on the losing team, it was Genia.

Phillips' failed to conjure similar levels of magic or invention. His tactics never changed and he continually careered into Australian flankers with all the determination and nous of a moth crashing into a light bulb.

However, Genia didn't bother himself with anything as mundane as light bulbs. Why bother with light bulbs when you have the ability to light up the whole game yourself?

Don't write Phillips off yet though. Those who do, usually end up wearing eggs as facial adornments. However, for the second test, Robbie Deans will be happy to let people have the beauty and the brawn of Mike Phillips because what is beauty without brains? And the brains belong to Will Genia.