Without even managing to get a grasp on a match ball, Rob Kearney may be about to return from Oz. The Leinster man was one of the stars in South Africa four years ago, but this time Irish eyes may not be smiling on Kearney as a torn hamstring threatens to end his tour early.

Hopefully the fullback will pull through, you would not wish the cruelty of a tour ended this early on anybody. However, if Kearney doesn't pull through, who can expect a call from Gatland? Here are some people who may be waiting nervously by the phone for the coming days.
Jonny Wilkinson
Not a naturally a fullback, but "Wilko" is bound to be mentioned as a replacement. Such is the excitement for the Toulon fly half to join up with the Lions, the only surprise is that he wasn't mentioned as a replacement for Dylan Hartley. Jonny may join up with Gatland's men later in the tour, but surely not as cover for fullback.
Lee Byrne
An in form fullback who is continually over looked for international duties of late. Byrne has gone from strength to strength since his switch to France, finding some of the best form of his career at Clermont-Auvergne. He has featured rarely under Gatland for Wales though, so will he get the break he needs on an even bigger stage?

James Hook
Another Welshman exiled to France. Hook's biggest strength isn't his dancing feet or dynamite boots, but his verastility. Hook has spent much of the season playing at 10 for Perpignan, but has experience in the centre and at fullback. He could be a useful tool on such a gruelling tour, but is arguably not the best out and out fullback of the options available.

Mike Brown
Harlequins fullback Brown does prefer to ply his trade at 15 and it is where he plays best. Stuart Lancaster, however, decided to switch Brown to the wing for the 6 Nations. The change did Brown's Lions hopes no further, especially as a rampant Alex Cuthbert ran riot on the final day. Has the damage been done to Brown's reputation or can Gatland spot the true talent Brown holds as a fullback?

Ian Madigan
Also an outside half by trade, but Madigan has put in some impressive displays in a 15 jersey. Madigan has continued to progress and impress in the Pro12 and Europe. Guy Easterby thinks Madigan is the "whole package," but will Gatland by put off by his lack of experience, with just two substitute appearances for Ireland to his name? 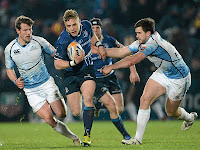 Liam Williams
A fan favourite at Parc Y Scarlets for his tough tackling and no nonsense attitude, "Sanjay" has quickly risen through the ranks at regional and international level. Defensively sound, good under the high ball and a strong runner, Williams has certainly attracted attention and his Wales appearances have only highlighted him further. Currently in Japan with Wales, he is easily accessible and on Gatland's radar. His temperament is questionable though. Talking of his "short fuse" Rugby World's Paul Williams tweeted "Liam Williams doesn't have a short fuse. There is no fuse. Detonator connected straight to the bomb."

If some of the fullback options have split personalities, unsure which position is their own, Saracens' Alex Goode is perhaps the most schizophrenic of all. A fly half pushed to fullback due to lack of options, he made the position is own for club and country only to be told he would provide cover at 10 on England's tour of South America. Will the portrait of Goode as reliable and dependable, but not prolific in attack (even if the stats suggest otherwise).

Delon Armitage
Another player with a questionable temperament, but can be no questioning Armitage in terms of talent. The Toulon fullback is quick, confident and capable, but he has a list of misdemeanours longer than a Paul Thorburn penalty including night club fights, pushing doping officials and use of the knee. Any hope that France will have helped him mature is so far short lived and a recent Twitter spat with Brian Moore only serves to emphasise the point. Will Gatland be willing to test another bad boy after getting his fingers burned by Dylan Hartley?

Iain Balshaw
Yet another Brit plying his trade on the other side of the Channel. Balshaw has found a new lease of life in the Basque sunshine of Biarritz and is playing the best rugby of his career and at 34 Balshaw is playing like a man ten years his junior. He continues to be overlooked by Stuart Lancaster, but with no long term future to look at a call into the Lions setup could a shrewd move by Gatland. Such a move would be highly unlikely though.

With Kearney's future on the tour hanging in the balance which of these men will be lucky enough to have Warren Gatland call them?