In Grogg We Trust

One unusual Welsh tradition though, revolves around six inch ceramic icons from the Rhondda Valley.
In the 1960s, fed up of creating ceramic figures of giants from Welsh folklore, sculptor John Hughes moved to creating giants of Welsh rugby lore instead. Starting in a garden shed in the depths of the valleys, Pontypridd RFC fan Hughes became nationally renowned for his Groggs. So too did his World of Groggs in Treforest, a proverbial Aladdin's cave of clay delights where even the autographed walls are a timeless collection of the talented and famous to have the honour of being 'Grogged.' 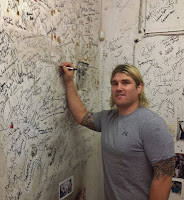 As the reputation of Groggs grew, so did the catalogue. Branching out from rugby to include the biggest stars from music, the silver screen and beyond. Through the glory days of Welsh rugby in the 1970s and the lows of the 1990s, Groggs thrived among rugby fans and lovers of pop culture in Wales and further afield.

With jinking hips of The King of Fly-halves next to the shaking hips of the King of Rock 'n' Roll and Tom Jones standing next to Tom Shanklin, the World of Groggs has something to offer everyone. These miniature statues of great icons are much sought after in many homes in Wales and around the World. 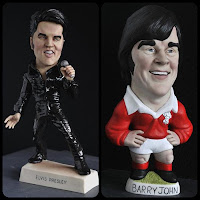 Groggs have become part of Welsh culture. They are as synonymous with the national sport as Bread of Heaven, Max Boyce and half time faggots and peas (fear not my American readers, of which I know are numerous. Faggots are something completely different here is Wales).

With each mould only having the ability to be used a small number of times, new moulds are essential even with the quantities of each Grogg limited. With each mould having it's own unique quirks, two identical Groggs are rare.

Speaking of Gareth Edwards Groggs to the BBC, Hughes stated he know of people with "fifty Gareth Edwards's and they are all slightly different." This uniqueness of each Grogg adds to their charm and collectability. 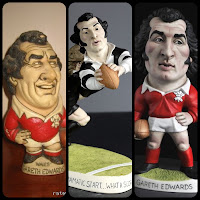 As time passed, demand grew and John's health declined. The work on the effigies moved onto the next generation with son Richard completing the design and pottery, while daughter Catherine applied the paint work.
On the 19th June 2013, after a long battle with illness, John Hughes sadly passed away, though he will always live on through his creations. 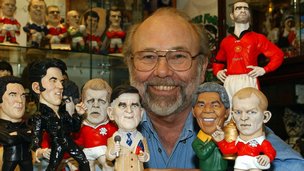 So, this time, no song. Instead we raise a glass of bitter ale to John Hughes, the man who made little, big celebrities.

Take a look at all John, Richard and Catherine's creations at www.groggs.co.uk.