Barbarians: Not Over Yet

After England’s hammering of the Barbarian FC it is inevitable that many people will again be questioning the existence of the invitational team in the modern game. However, the death of the Baabaas, much like that of Mark Twain, will be greatly exaggerated.
So, before the death knell tolls or the funeral march plays, let’s realise that there is a place for the Barbarians in the professional era. They represent all that rugby should hold dear; its traditions, idealisms and morals all live on through the men in black and white.
Rugby is the least likely of sports in which a team such as the Barbarians should exist. It's a game where lineout calls would challenge even Bletchley Park's finest and where trust in the man by your side is must surpass even that in your spouse. Short preparation times and limited training sessions does not bode well with Union at the highest level, but the Barbarians continue to defy logic and get results. 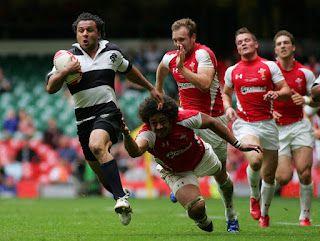 In 2011 they overcame lack of game time, minimal training and excessive drinking to claim last gasp victories over England at Twickenham and Wales in Cardiff. It is results, we are told, that define a modern rugby team.
The Baabaas transcend that notion though. Victory is important, but not always paramount. Success should come through discipline, through enjoyment, through entertainment.
The Barbarians invite players with those ideals in mind and rarely do they leave the field having not provided the entertainment and flair the tradition demands. It unites players, clubs and nations on the same pitch, with the same badge, in the same shirts and different coloured socks. 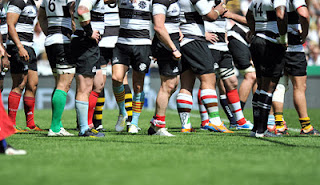 It is that flair that inevitably leads to comparisons to the Harlem Globetrotters in a manner that is almost demeaning. The comparison to basketball’s biggest entertainers will always rear its ugly head, but make no doubt this is a different beast entirely. You'll find no confetti and no unchallenged ball juggling to 'Sweet Georgia Brown.’ This is not exhibition, this is competition and the only theatrics are the ones of genuine nail biting tension.

Any obituary that may be written for the Barbarians would be as awe inspiring as it would premature. Gareth Edwards and JPR Williams running in two of the greatest tries in the history of the game against New Zealand in 1973. Andy Ripley leading them to Hong Kong 7s success in 1981. Breyton Paulse’s hat trick followed by a high flying celebration against Australia in 2001 being just a few of many highlights along the long and exciting journey of rugby, at times heavenly enough to have graced a pitch of soft, white clouds on another celestial plane. 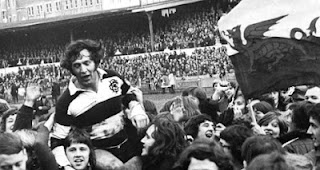 Should the Barbarians ever reach the end of their fantastical journey at some point in the far off future the inscription on the headstone that marks the rugby grave has surely already been written…
"Rugby Football is a game for gentlemen in all classes, but for no bad sportsman in any class." - W.J. Carey


Not Over Yet - The Klaxons