Our Lions selector continues. Last time we looked at the contenders for the fullback position. This time we continue to look at the back line by casting an eye over the wings hoping to get a call from Warren Gatland.

Scotland's back three are impressive with ball in hand to say the least. Stuart Hogg has garnered much praise at fullback and a switch to the wing would be well within the Scotsman's ability. More likely would be New Zealand born Sean Maitland and Flying Dutchman Tim Visser. Maitland may not have had chance to prove himself in the blue of Scotland yet, but he has proven himself in the Southern Hemisphere whilst at the Crusaders. Visser has proven himself at international level including a brace of tries against world champions the All Blacks. Visser is very strong and lightening fast and would be a handful for any team to stop. 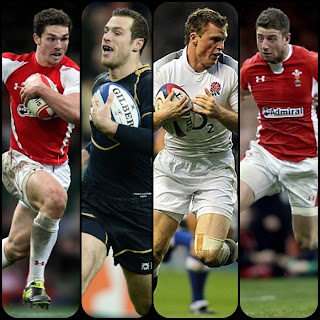 Again, as with fullback, England lack potency in the wing. Chris Ashton would have been the closest to pulling on the red of the British and Irish Lions, However, a poor Six Nations may have all but dashed Ashton's hopes. Over the course of the tournament Ashton carried for just 99 metres. Olympic sprinter Usain Bolt runs 100m in 9.67 seconds, Ashton had six weeks and still managed fell a metre short. Compare that to the Welsh duo of Alex Cuthbert and George North, who carried for almost 300 metres each, and Scotland’s Stuart Hogg who carried almost 90 metres in one try scoring break against Italy. Add to that some glaringly obvious defensive frailties after he was embarrassed by Wesley Fofana and only Mike Brown saved his blushes after North himself beat him with easy. Could Christian Wade be an outside choice to make the trip though despite being overlooked by England?

Ireland’s inexperience out wide may rule out any appearance of an Irish flyer in the Lions midst, save for a phenomenal return from the physio bench from Subway’s finest, Tommy Bowe. Simon Zebo thrust himself firmly into contention, ball juggling footwork et al, before injury cruelly dragged him away. Don't rule out Craig Gilroy board a plane bound for Australia yet. The young Irishman would relish the opportunity and may shine on the big stage. 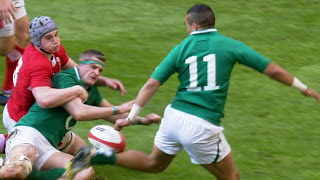 Finally, back to that Welsh pair mentioned earlier. The man who may be Northampton's newest flyer, George North, is almost a certainty for one wing birth in summer, but could Gogzilla's national teammate balance up the other side? Alex Cuthbert entered the Six Nations with a huge question mark over his head with regard to his defence and position, but he grew stronger with every game of the tournament and ended with a a performance that silenced the doubters against England and helped land the title. Couple that with notable carry and try stats, not just for Wales but also a stuttering Blues team, and the reality is Cuthbert is quickly becoming a star of international quality.

Which players will make the starting XV will almost certainly go down to who performs best on tour. My starting wingers would be George North and Tim Visser. It is a closer run thing between Visser and Cuthbert, but Visser gives a little national balance to the team.

But that's just my thoughts and my words on a wing.

David Bowie - Word on a Wing