The fireworks have fizzled out, the champagne drunk, morning after aspirins taken and it's everything back to normal for Welsh rugby. At least until Saturday, when Judgement Day descends on Cardiff and thrusts the Millennium Stadium back into the spotlight it so justly deserves.

Judgement Day sees all four Welsh regions disembark at the capital for two East v West derbies in one action packed day of rugby. With Newport-Gwent Dragons kicking things off against the Scarlets before Cardiff Blues take on the Ospreys. The stage is set and repercussions are huge.

The Dragons go into the weekend 10 points adrift of the Blues with hopes of a Heineken Cup place on their minds. 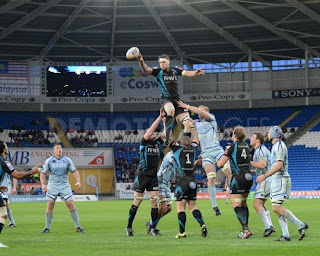 Meanwhile, the bitterest of West Wales rivals, Scarlets and Ospreys, can hardly be separated. Both teams sit on 54 points with the Swansea based Ospreys' superior points difference placing them in a playoff spot whilst their Llanelli based rivals sit only one place outside.

The WRU should be roundly applauded for an excellent concept, following the lead of the Aviva Premiership, not to mention the Super League in the 13 man code who used the same stadium for their Millennium Magic weekend.

The event is not without flaws. With many feeling the pinch of an ever tightening belt, the £25 ticket is a little steep when trying to bring 'new' fans through the gate.

The WRU also seem to have missed the obvious when choosing the date of the event. With almost 80,000 registered players in Wales, moving the games to Easter Sunday would surely have allowed a greater access to rugby fans with only approximately 30,000 of the 74,500 available sold.

Come This weekend all flaws, perceived errors or worries should be put aside for what will hopefully become a permanent highlight of the Welsh rugby calendar and an important day in the future of the Welsh regions.

If the rugby is half as entertaining as the setup then we may be in for one hell of a show, maybe even enough to reignite those fireworks.